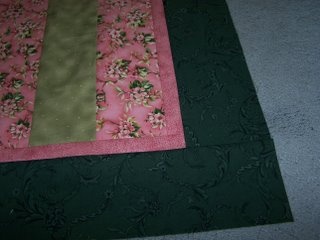 Well, here it is. I finished this up on my Singer, thank goodness for a backup machine! The outer border looks so dark here, but it's actually a deep, deep green. The pinks are from my stash, so I did do a little busting with this quilt. I'm going to use the border green for the backing and binding.
I feel like I accomplished a little today. I did this quilt, loaded a customer's quilt on the longarm, and did some applique prep. Now I can relax and enjoy the game and the snacks. I know I'll pay for it tomorrow, but hey-you only live once, right? 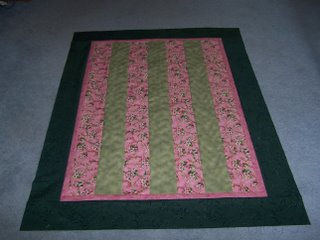 I've been going around the ring and it's weird. Hitting next doesn't get me around the whole group. Anyone know why this happens?
I'd like to learn how to put peoples' names in my blog as a link to their sites. I'm going to have to research some more.
Well, that's all for now. I hear a jalopeno popper calling my name. YUM!
Posted by Eileen at 4:39 PM 13 comments:

I have a Viking Model 415-called the Freesia. I got it in 2003, so it's really not that old. Today, it died. Well, more specifically, the foot pedal died. But before it died, it put on a show. I was sewing along on the baby quilt that I have to bring to a shower in 3 weeks, and the circuit breaker tripped. I thought it was the iron, so I turned that off, and Mike went down to the panel with a flashlight and turned it back on. I tried to press down on the foot pedal, it whined and the circuit breaker tripped again. So down went Mike and turned it on. He played with the wire on the pedal a little, and the darn breaker tripped AGAIN!!!
Obviously, you don't have to hit either one of us over the head, just trip breakers on us. We'll catch on eventually..........
I was so impressed with myself. I was going to do the whole baby quilt top in one day. See what happens when I get too cocky?
So now here I am with a dead Viking in my sewing room. I'll haul out the Singer tomorrow and finish the quilt top. Hopefully, nothing will trip.
I went out to the Viking website to try to find a foot pedal, but lo and behold, my sewing machine is outdated. Surprise, surprise. I sent an email to a LQS that handles Vikings. I'll probably have to have it looked at, since Mike says there's nothing to the pedal so it must be something else. When the machine is turned on the needle does a little jog back and forth. Well, it was doing that on and off all afternoon, so he's probably right. Dang.

Tomorrow's the SuperBowl. I don't know which team I'm going to go for, but Mike's going for the Colts. We're staying home and having our own little shindig. Not a healthy food in sight. I guess the diet will really start on Monday. That wedding is getting closer.

I got the approval for the EMG and nerve conduction tests. There's a ridge of bone near the fusion site that's pressing on nerves on both sides, but the doctor will try to make it so I don't have to have more surgery. The ridge wasn't there before my surgery in June. One of the moms on my elementary run who works with insurance said I ought to sue. She wants to talk to me off the bus and she'll tell me what she thinks.

That's it for tonight. I've got Patti's applique instructions so I'm going to prep some pieces to do during the game tomorrow.
Posted by Eileen at 7:19 PM 6 comments: